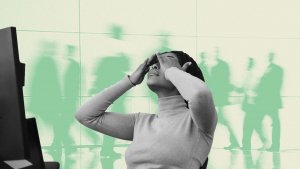 Imagine it’s midnight, and on the television, you hear the melodic sound of the national anthem playing, followed by grey fuzz like in Poltergeist. And then silence. Until the late 80’s television actually signed off. There was nothing to watch until 6 am in the United States.

Today, there is a nonstop launch of new shows, movies, and media in a 24-hour cycle with an appetite for constant content on thousands of stations and social media. Not to mention the general noise around us.

People take calls on speaker phone in public places, they yell across stores to their friends or coworkers, cussing has become a part of general everyday language, and thanks to television and movies, it is not uncommon for your boss to yell or have a fit. The world has become a very loud place with no time off. It’s no wonder that you may be feeling overstimulated.

Some signs of overstimulation are:

· Stress, fear, and anxiety about your surroundings

· Unable to focus in general and when there are background sounds

· Overwhelming feelings of isolation or loneliness

These distractions can be bad enough when you are just managing your overall mental well-being but when you are also managing a mental illness it can be crippling.

Many different mental illnesses are associated with a heightened sensitivity to stimuli from the outside world, among them are post-traumatic stress disorder (PTSD), anxiety disorders, schizophrenia, schizoaffective disorder, bipolar disorder, attention deficit (and hyperactivity) disorder (ADD/ADHD), just to name a few

Often the response is to just stop or freeze, isolate, or you may have an outburst that seemingly comes from nowhere.

TikTok users spend an average of 95 minutes per day on the platform and 29 minutes a day on Instagram. YouTubers are averaging 29 minutes a day and US adults spend around 3 hours a day watching TV. While it may not seem like a lot, that does not take into account texting, slacking, snap chatting, and so many other apps being used daily.

According to an article in Psychology Today, Tom Fleckenstein offers these tools to better manage overstimulation and strong feelings.

· Recognize triggers and reasons for your emotions, e.g., “I feel…because…” or “Whenever I do…., I feel…”

· Normalize your emotions — recognize that it’s normal and not a problem to feel the way you feel. Also, that other people feel like this in similar situations.

Other ways to manage sensory overload include:

· Set time limits on how long you will spend on your computer, watching tv, looking at your phone

· Don’t reach for your phone first thing in the morning

Use your media to be informative as well as entertaining. Movies and tv are a great way to tap into emotions that may be stuck. I know whenever I was frustrated at work, I would always watch Set It Off and whenever I needed a good cry, I would watch anything with a cheesy proposal and/or a wedding. A great resource to really break down movies based on the emotions they elicit is Positive Psychology at the Movies.

Lastly, learn to sit in silence. The Persian poet Rumi said, “Listen to the silence, it has so much to say.”